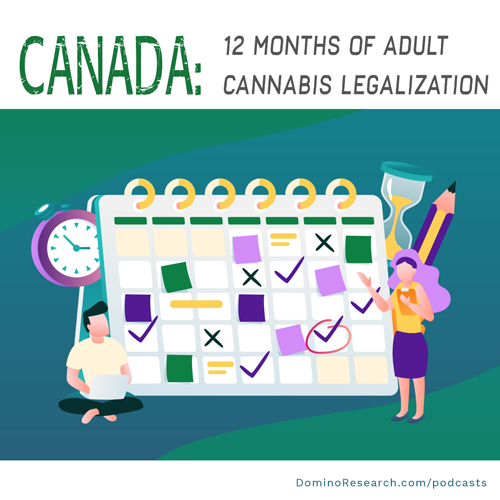 Canadian Cannabis After One Year of Legalization (ep 102)

Show Notes | Episode 102 | Canadian Cannabis: 12 Months After Adult Use Legalization | Episode Link URL – https://dominoresearch.com/podcast/canadian-cannabis-one-year-legalization | Has it really been a full year since Canadian cannabis for adult use was legalized? What's happening with the state of affairs in the country now? Catch our update right here!

Cannabis Culture
Canadian Cannabis After One Year of Legalization (ep 102)

Canadian cannabis sales for adult use has been legal for just over a year now.

If you’re not familiar with the situation, Canada enacted a federal law making Canadian cannabis sales to adults legal, and that law went into effect slightly more than one year ago.  We’re taking a look at where things are overall at the federal level, and breaking down a few provincial issues as well in the latest podcast episode.

[LISTEN: 18 Days in Instagram Jail – What Did We Do? – PODCAST EPISODE]

As the world watches, Canada is closing in on one year of cannabis legalization and there’s a lot that’s happened over the course of this last year. No one could expect that the CEO of a major LP is ousted, an LP itself lost its cultivation License nor that the black market is still going strong – wait people did predict that one…this and more on today’s podcast.

There have been a few upsets and downsides to the legalization process as the year has progressed, but things are still moving along at a really rapid pace.  Stores have opened, online sales are going strong, and people seem happy, but all is not roses and sweet smells in the land of adult use Canadian cannabis.

Many cannabis advocates have worked with the Canadian government to get past cannabis convictions overturned, since its not a crime. And the government announced in the summer that pardons are now available for Canadians convicted of simple cannabis possession. The introduced bill C93 which enables Canadians to obtain a free, no wait pardon for simple possession of cannabis.

“We know that this is particularly significant for many in minority communities, including black and Indigenous Canadians who have been disproportionately affected by the enforcement of cannabis laws.”

So many people who have been convicted of Canadian cannabis related crimes will find themselves not completely cleared of wrong doing but with a partial redemption on their records.  Neat, huh?

But wait!  There’s more – grab your earbuds or your headphones and join us for this episode of the podcast!